TLDR: We present a new tool for evaluating the security of AMD-based platforms and rediscover a long-forgotten vulnerability class that allowed us to fully compromise SMM in the Acer Swift 3 laptop (see Acer's advisory).

In the last decade, a lot of interesting research has been published around UEFI and System Management Mode (SMM) security. To provide a bit of background, SMM is the most privileged CPU mode on x86-based systems; it is sometimes referred to as ring -2 as it is more privileged than the kernel and even the hypervisor. Therefore, keeping SMM secure must be one of the main goals of the UEFI firmware.

One thing that caught our attention is that most, if not all, of the publicly available material is focused on Intel-based platforms. Since the release of CHIPSEC [1], the world has had a tool to quickly determine if the firmware does a good job protecting the system after the DXE phase and, as a result, it is hard to find misconfigured firmware in laptops from any of the major OEMs in 2022.

Make no mistake, it is not that AMD-based platforms are free from bugs [2]. Nevertheless, judging by their description, these seem to be associated with SMI handlers rather than platform security configurations. In contrast, the only presentation we found mentioning AMD platform security was done by Pete Markowsky in 2015 [3].

This blog walks through the discovery and exploitation of a security issue that was automatically identified by an in-house developed tool.

Platbox is a firmware assessment tool that allows you to retrieve chipset configuration values and interact with PCIe devices, physical memory, MSRs, and so on. The project was born back in 2018 as part of a security evaluation for an OEM's Intel-based platform; however, we recently extended it to support AMD systems. 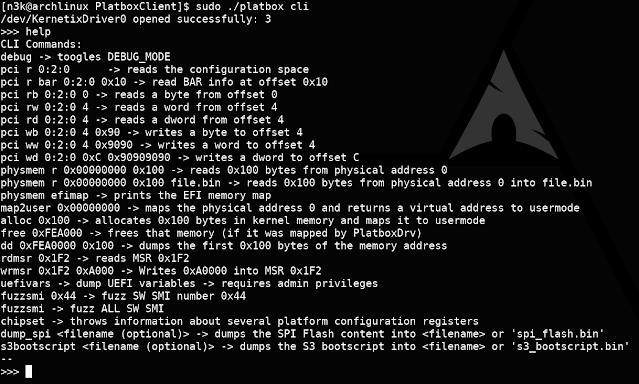 Next, we evaluate the security of one of our targets AMD systems and demonstrate how it can be used to find chipset configuration issues.

The reference to another section at the end of the definition provides further clarification: it states that specifically MSRC001_0112 and MSRC001_0113 registers are configured to be read-only when the SMM lock bit is set:

Digging deeper into the aforementioned registers, we see that the MSRC001_0112 register corresponds to the TSEG base address. This is the base address of a protected memory region that can only be accessed when the CPU is in SMM. 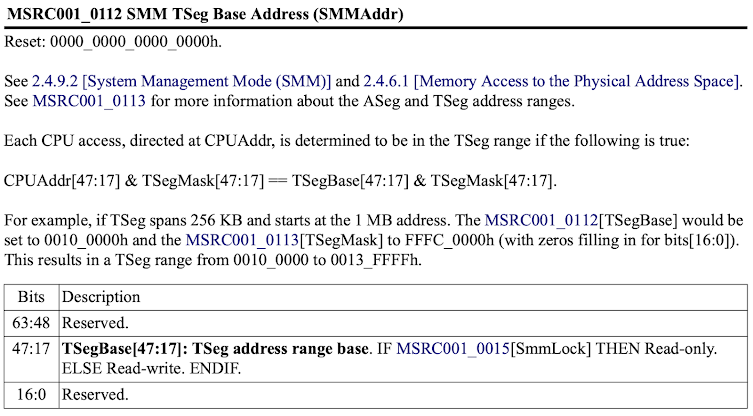 The MSRC001_0113 register, on the other hand, is the TSEG mask that configures, among others, the size of the protected TSEG region, the memory range type and whether the TSEG or ASEG region should be enabled.

However, the definition of this register also tells us an important fact, namely that the ASEG and TSEG region are used to securely store SMM code and data so that it cannot be accessed when the CPU is not in SMM. If we can disable these regions, we can directly access SMM memory from the kernel.
The bits controlling whether the ASEG and TSEG regions are enabled are bit 0 and bit 1 in the SMM mask register, respectively. By setting these bits to 0, the protections should be disabled.

Having found this issue in a relatively modern system came as quite a surprise, as  it was first documented by Duflot et. al. in 2006 [5] and since then, at least for Intel platforms, OEMs have basically eradicated it.

To exploit this vulnerability, we run the Read&Write Utility and add the SMM TSEG mask register to the list of custom MSR registers: 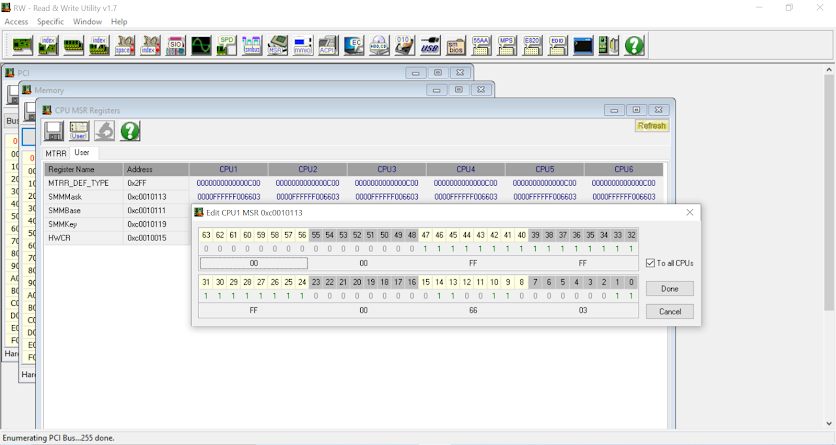 Next, we set the last two bits, corresponding to the ASEG and TSEG valid bits, on all CPUs to 0: 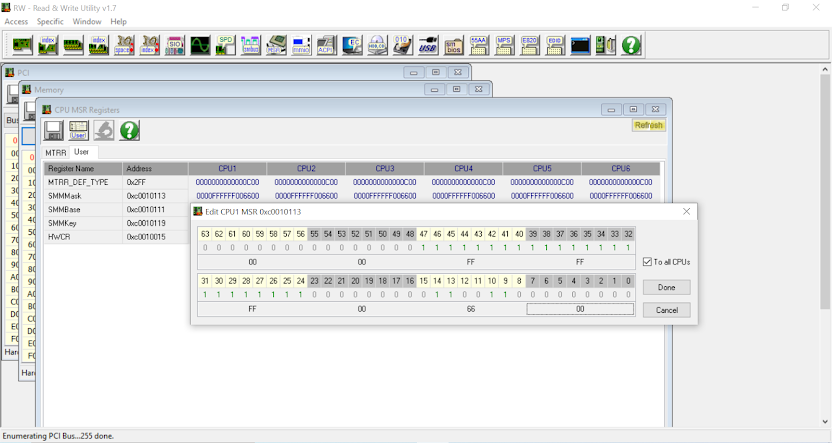 Finally, we confirm that the beginning of the TSEG region is accessible by inspecting the memory: 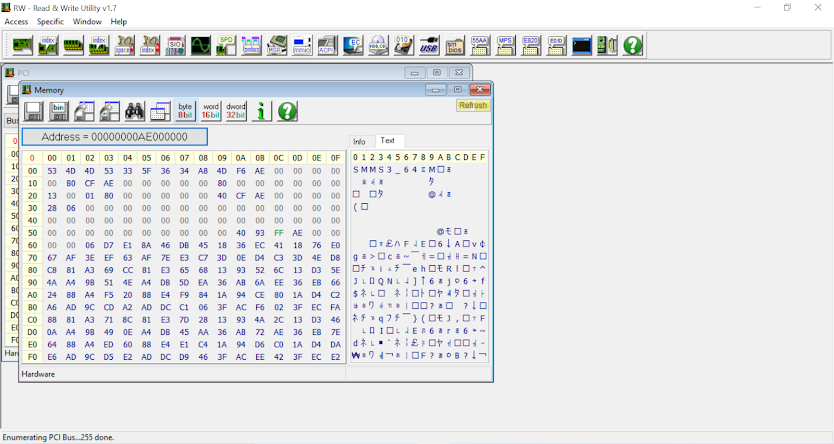 The magic SMMS3_64 at the start of the TSEG is the first member of the SMM_S3_RESUME_STATE structure, which, based on the EDKII reference code, gets mapped here (https://github.com/tianocore/edk2/blob/7c0ad2c33810ead45b7919f8f8d0e282dae52e71/OvmfPkg/SmmAccess/SmramInternal.c#L187): 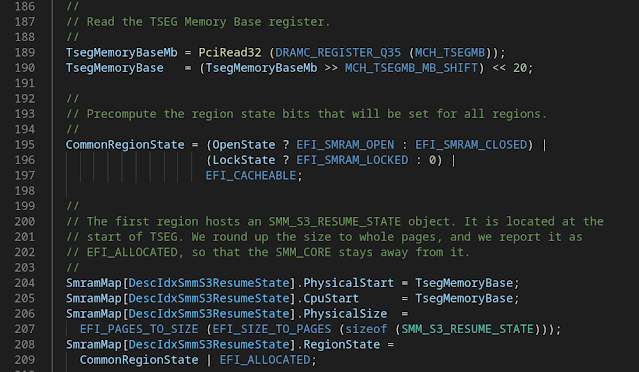 From here on exploitation is trivial as we have full read and write access to SMM memory.
Here is the SMRAM dump for those who want to perform additional analysis on it: https://github.com/IOActive/uefi_research/tree/main/acer_swift_3_sf314_42