We identified numerous serious security vulnerabilities in both devices, including broken or backdoored authentication mechanisms, rudimentary data parsing errors allowing for complete device compromise over the network, completely inadequate firmware security, and sensitive information disclosure, including the leaking of terminal GPS coordinates. These issues were present in all reviewed firmware versions, including the currently available release.

The primary goal of this research was to determine the security posture of these two SATCOM terminals, whose application spans multiple industries. By taking the results of this research in isolation, IOActive hopes to gain insight into the current state of security in the SATCOM industry. Additionally, by comparing the research results with the conclusions drawn from the research we conducted in 2014 and 2018, it is possible to assess how much progress toward improved security has been made in that time.

Furthermore, given the bleak outlook of the findings of this research, IOActive hopes that the publication of this information will increase awareness of these issues and make the necessity of immediate corrective action very clear.

The Wideye iSavi is a portable satellite terminal operating over the Inmarsat iSatHub and BGAN services, offering voice, text, and Internet connectivity to devices connecting to the iSavi via a built-in WiFi access point. It is designed for general consumer use as per the Wideye documentation, allowing maintained connectivity for those outside the range of coverage of traditional ground-based Internet infrastructure. It may or may not be configured to be accessible over the broader Internet and can be managed remotely via a web interface or other means.

The Wideye SABRE Ranger 5000, built on technology similar to the iSavi, is a BGAN Machine-to-Machine (M2M) satellite terminal. It is designed to operate and stay connected to the Internet without interruption and is commonly configured for accessibility over the wider Internet, to allow for remote management. It is intended for industrial use, with the Wideye brochure [1] suggesting its use in the following industries: 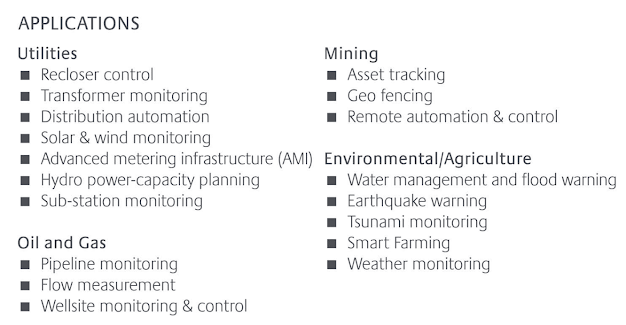 Despite the varied uses, investigation into the two devices indicated that very similar firmware runs on each. As such, all vulnerabilities identified during this research effect both the iSavi and the Ranger, with the impact varying somewhat for each vulnerability based on the use-case of each device.

Firmware versions analyzed during this research include:

Before elaborating on the vulnerabilities discovered during this research, it is important to understand what kind of threat is posed by any given attack, and how to think about that attack’s impact.

Since we will be looking at SATCOM terminals, it is important to understand the paths available to an attacker for potential device access. Figure 2 comes from the SABRE Ranger M2M (an older SABRE Ranger model) marketing brochure [3] and lays out the architecture of SATCOM terminal communication nicely. The layout for the iSavi differs slightly, in that its internal network is established over WiFi, but the diagram is still accurate at a high level. 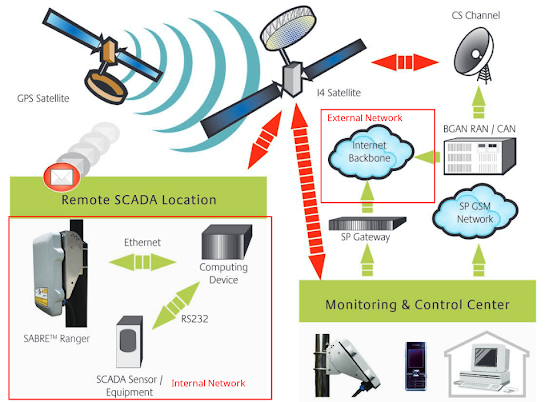 Both the Ranger and the iSavi have the capability to be made accessible over the Internet, with or without a static IP address. This feature is more likely to be enabled on the Ranger, as its stated purpose includes remote access of resources to which it is connected.

Both the Ranger and the iSavi support some means of connecting the devices to a local IP network, which will then allow for routing of data between those devices and the Internet. For the iSavi, this is a WiFi access point. The Ranger includes two Ethernet ports which serve the same purpose.

While the iSavi’s functionality is limited to network connectivity, the Ranger also includes various physical interfaces for industrial equipment, including GPIO, analog, serial, and ModBus. While these interfaces could potentially be subject to vulnerabilities, exploitation via these interfaces would require physical access to the equipment, and as such are of lower impact than those attacks which can be performed remotely/semi-remotely. However, it is important to consider the impact that the compromise of this device might have on connected equipment; Figure 3 is from the Ranger 5000 brochure12 and provides an example of the kinds of equipment that would be under attacker control in such a scenario. 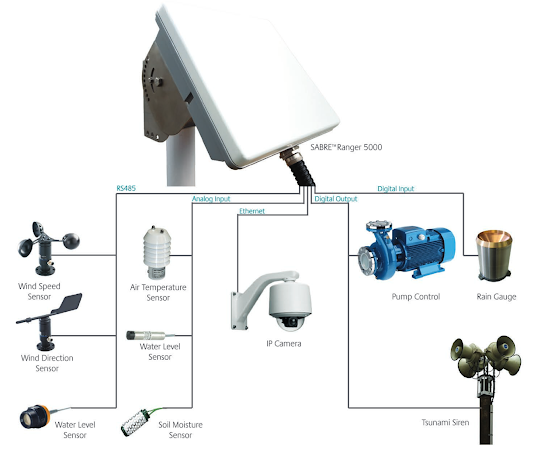 The whitepaper lays out several plausible attack scenarios for the SABRE Ranger 5000 and the iSavi, taking into account the intended applications of each device and leveraging one or more of the vulnerabilities identified during this research. These scenarios include potential disruption of Emergency Services operations for the iSavi, and an undetected attack on critical Oil and Gas infrastructure for the SABRE Ranger 5000. In both cases, a reasonable case for a risk to human safety can be made.

The stated goal of this research was to assess the security posture of two SATCOM terminals, the iSavi and SABRE Ranger 5000 from Wideye. Our assessment found the security of both devices to be extremely poor and cause for serious concern to the various industries which may make use of these products, including Oil and Gas, Agriculture, Utilities, Mining, and any remote work which must rely on satellite connectivity due to location or circumstance.

Taking these results in isolation, our assessment gives clear indication that neither the Availability, Integrity, nor Confidentiality of either the iSavi or Ranger 5000 is protected from compromise. These devices are affected by numerous vulnerabilities which are well established in the industry, with proposed fixes and well-known best practices in some cases for several decades. In other cases, the devices have been made less secure by design, with the introduction of several sets of hardcoded “backdoor” credentials—a practice understood to be insecure in all industries.

The results indicate that those devices exposed to the wider Internet, a possible configuration for the Ranger 5000 (whose marketed purpose is remote management of industrial assets), are at especially high risk. However, even if the devices are not exposed directly to the Internet, many vulnerable services are unnecessarily exposed to the satellite network, which still provides ample opportunity for attack from within that network.

Users of these devices can take steps to mitigate some of these issues, such as enabling the device’s firewall and heavily restricting access to only those IPs explicitly known to be trusted. This is not a panacea and does not fully protect these devices. The final responsibility for securing the iSavi and Ranger 5000 lies with the vendor, who is the only entity in a position to meaningfully correct the issues identified in this paper.

Taken in the wider context of the SATCOM industry and IOActive’s previous research in this field, the results of this research are a uneasy indication that the SATCOM industry has not heeded the many warnings of researchers and security professionals over the last decade, maintaining an unacceptable attitude toward security inappropriate in the face of the threat landscape of the modern age. As SATCOM technology becomes more advanced and is relied on more heavily by a variety of sectors, the security of this industry will only become more vital. It is in the hands of SATCOM vendors to rapidly modernize their approach and attitude toward security.